I must admit – the first time I ever walked into the Legion here in Canmore it was with very mixed feelings. I was born in Germany in 1964 and the war was long over by then. But Germany had started and lost both world wars.

I grew up with a lot of war guilt. History class hammered it in again and again.

Alongside Austria-Hungary, Germany had fought and lost a fierce battle in World War I from 1914 to 1918. A war that claimed 16 million casualties. Canadian troops fought alongside troops from Great Britain, France, Russia, Italy, Romania, Japan, and the United States against troops from Germany, Austria-Hungary, Bulgaria, and the Ottoman Empire.

In 1939, Germany started WWII with the invasion of Poland. The war lasted 6 years. It was the deadliest conflict in human history and resulted in over 80 million fatalities.

As a teenager my parents sent me for a year to a private school in South-West England. Every Saturday was movie time. I still remember those nights when war movies were...

What you need to know to navigate the market right now!

A raging virus,  a war in Europe, rising inflation;  investors, politicians and decision makers worldwide are finding it more and more challenging to navigate our fast-changing worldwide economies. What is happening worldwide and nationwide also has a direct effect on every single person locally. We are all past, present or future homeowners and a real estate transaction can easily be the biggest transaction of our lives. More than ever, we need to know what’s happening in our local markets to make the right decisions. Decisions today are harder to make than in the past, but will have lasting consequences in future years.

The Governor of the Bank of Canada, Mr. Tiff Macklem held a speech on October 6th, 2022 before the Chamber of Commerce in Calgary. During his speech he stressed the necessity of another interest increase to slow down...

Read more to find out why!

The secret is out on Canmore’s beauty, amazing lifestyle, and heavenly setting. Nestled in the mountains just one hour away from Calgary and right on the border of Banff National Park, this charming mountain town in Alberta has it all.

In summer, visitors come to spend time hiking the absolutely stunning mountain trails, but they soon discover that Canmore has so much more to offer! The curious adventurer will discover more sports, life music and arts. Canada Day, The Highland Games, The Canmore Folk Festival, Canmore Uncorked or Xterra Canmore Triathlon are just a few of the events which represent Canmore’s versatility.

Sport enthusiasts can’t get enough of living here once they discover the multiple activities available so close to their homes. Golf lovers can choose between three golf courses, kayakers and stand up paddleboarders can paddle down the Bow River or in the reservoir....

Update on Purchase Prohibition of Residential Property by Non-Canadians Act

Update: Prohibition on the Purchase of Residential Property by Non-Canadians Act

On June 23rd, 2022, the Parliament of Canada passed legislation called “The Prohibition on the Purchase of Residential Property by Non-Canadians Act”, which will come into force on January 1st, 2023.

The Government is now working to finalize certain details in regulations under the Act. These details include selected definitions, exceptions and enforcement elements. Additional revisions may still affect this new actm but stakeholders are advised to check early if the Act could apply to them and the implications.


The Act prohibits non-Canadians from purchasing, directly or indirectly, residential property in Canada for a period of two years. Canadian Citizens and Permanent Residents are not subject to the prohibition.


The act defines residential property to include any real property or immovable property of not more than...

On June 9, 2022, Canada’s Bill C-8 was enacted. The bill implements certain measures including Canada’s new 1% “Underused Housing Tax”. This new law is retroactively effective January 1, 2022. The stated purpose for introducing this national tax was to ensure that non-resident owners who were using Canada as a place to passively store their wealth in housing pay their fair share.

Some details have not been confirmed yet thus regulation and additional revisions may still affect this new tax regime. Real Estate owners are advised to check if this new Act applies to them and / or if they have a tax filing requirement.

The Underused Housing Tax which applies on a calendar year basis is an annual 1% tax on the value of vacant or underused residential property directly or indirectly owned by non-Canadians and non- Residents on December 31 st of the particular calendar year.

Find out how this is influencing the real estate market in Canmore!

On September 7th, 2022, the Bank of Canada raised interest rates by 75-basis points. The benchmark rate increased from 2.5% to 3.25%, a 14-year high. This was the fourth consecutive outsize rate increase and hit a level not seen since April 2008.

Given the outlook for inflation, the Central Bank is anticipating that the policy rate will still need to increase further.

The Bank’s next rate announcement is on Oct. 26th, 2022. It will also publish its quarterly monetary policy report, which lays out the central bank’s latest inflation and economic growth forecasts.

Raging inflation, Covid still around the corner, a War in Europe …. in a globalized world, these international crises influence real estate even in such small and remote places like Canmore. Predictions on future market developments are dependent on multiple factors and become more and more challenging....

The title is giving it away…. 2021 was a record-breaking year in Real Estate in so many ways:

We have had positive numbers in every market segment and over every category except for one:

>  Lowest number of listings ever!

And that’s a real concern for the many buyers that have been trying to get a foot into the Canmore market but couldn’t. But let’s take a look at the sales numbers first and then look at listings at the end of this report when we cover the Outlook for 2022. 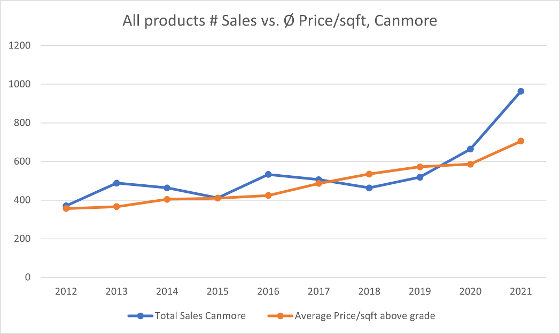 The graph shows yearly sales numbers in Canmore since 2012 in blue and an impressive increase in sales numbers of 45% in 2021 over 2020. The orange curve reflects how the average price/sqft increased by 20% to $705/sqft over the last year.

The unreal recovery of the Canmore Real Estate Market in 2020

The unreal Recovery of the Canmore Real Estate Market in 2020

Welcome to 2020 – the year of Covid! When at the beginning of the year Covid started to appear on the horizon, nobody here in Canada or Europe was really taking it very serious. And I remember several discussions that I’ve had with friends and relatives about this topic. Having experienced SARS several years back when I was still living in China, I had quite a different opinion from most of my friends on how serious this could become for us.

In May of this year, we had seen the first lockdowns and the Real Estate Market reflected what was happening all over. Sales numbers in Canmore were down by 44% compared to 2019 and the future looked grim.

But then something happened and miraculously demand for Real Estate came back. By the end of December we had 658 sales, which is 27% more sales than in 2019.

The reasons for this are still not entirely clear to me, but here are some possible explanations:

Is the Canmore Real Estate Market starting to recover?

Is the Canmore Real Estate Market starting to recover?

Comparing the sales data from 2019 with 2020 it sure looks like it! April 2020 shows a huge difference between 2019 and 2020 but May looks more promising. Interestingly prices have not come down except perhaps for a handful of hotel condo properties which sold quickly. Overall prices have remained rather stable. The amount of listings has not overly increased.

I will keep you posted as soon as the data for June is in! 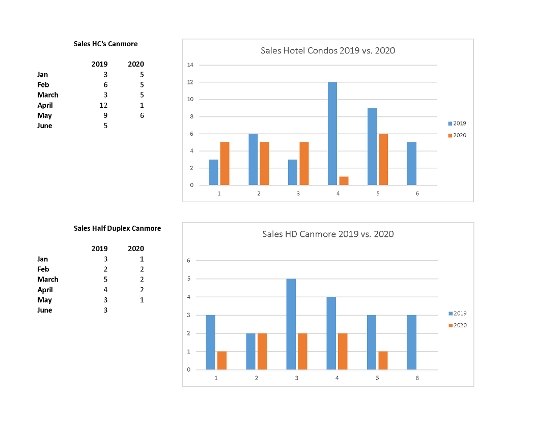 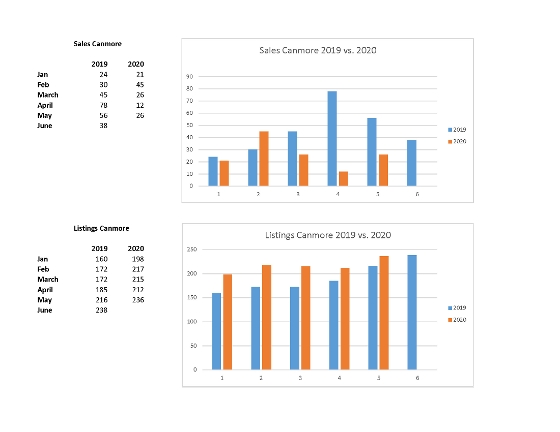 Canmore Real Estate during Covid-19; The First Quarter of 2020 and Outlook!

The Canmore Real Estate Market – First quarter of 2020 and Outlook